Pregnancy
Only if you are an experienced breeder should you be doing this. You will have to separate the sow and boar until the boar gets neutered. There is 20% chance that your sow or babies or both will die. It's best if you have a vet at hand.

Make sure you don't back breed! (back to back breeding) The sow will surely die from exhaustion. You should also make the sow comfortable during pregnancy as well.
Babies
There can be up to 8 babies born, but usually there is 3-4. 1-2 is very rare. So is 7-8. I don't know about 5 and 6. Baby guinea pigs are born with their eyes and ears open. You can pick up the babies right after they are born, although it may worry the sow. There is also a possibility that the babies will be still born or die shortly after birth. If the sow has mated with her brother, the babies will have deformities.
Genetics
Some guinea pig breeds shouldn't mate at all. If they do, they can produce a lethal: something that has small or no eyes, lots of deformities, crooked and yellow teeth, and a lot of medical problems. It will cost a lot of money to take care of a lethal, or the other option would be to put it out of it's misery.

More About Lethals
I got this article from allexperts.com

Lethal White is a syndrome in certain Paint horses caused by a genetic mutation carried by the parents. The foal is born pure white, often has no rectum and the intestines are unable to work. They are generally blind, unable to eat or digest food and the outcome is fatal.

We refer to certain breedings of guinea pigs as lethal whites but it's not actually correct in the true genetic sense. It comes from the crossing of a Roan to Roan, Dalmatian to Dalmatian, or Roan to Dalmatian. It occurs with a fair amount of frequency although not every time.

These babies are pure white, have mutated dentition (bizarre shaped teeth) are often blind and most don't survive.  It's because of the gene carried by each parent the same as with horses. There are 13 different breeds of guinea pigs and 12 of them can have roan coloring. The exception is the White Crested which only has white on it's head.

The breeders of Roans and Dals claim they get their best results from breeding Roan to Roan and are willing to risk a lethal white in a litter. The babies that are born roans or dals and not pure white do not have these issues. However, they are carrying the gene.

Crossing a mother and son or father and daughter does not produce a lethal white. When creating a new breed or variety within a breed (variety refers to color and/or markings) these breedings are done routinely to concentrate or "set the genes" of the breed or variety you are trying to achieve.

Example: the color Tan(marked like a Doberman dog) was developed in the UK. A couple of breeders from the US acquired a few Tans and brought them here to be bred and accepted by ARBA, the governing body that determines what is and is not an acceptable color or breed able to be shown. It could be compared to the AKC here in the states. New breeds and varieties are made, not born.

The eight Tans that came her in the late 1990's were crossed with Golden Agoutis which have a red belly but the top is black with red ticking or tips. Tans have the red belly but are solid black on top. Each breeder took a baby from the litter, crossed it with the parent and the babies born then carried a gene from each parent.

That litter is then crossed back to a black pig. Some of the babies of that litter (each carrying stronger genes for the Tan than the agouti) were crossed back to that black parent. Another Tan is crossed back into that third litter and some but not all of those babies are born Tan, the rest still carrying the gene.

The entire process takes about six to eight years before the breeders are consistently getting Tans in every litter. There will still be a throw back agouti or black occasionally, but again even those babies are carrying the Tan gene. Again, crossing the baby back to the parent will bring out the desired colors.

Occasionally experienced breeders will cross a brother to sister for the purpose of exposing bad traits in a line. You either get the best of the best or the worst of the worst. If there are coat faults in the genetic line they will be exposed in this breeding. You do NOT get two headed, retarded babies. And it is not something that is done on a regular basis. The purpose is to define genetic issues, nothing else.

So to make a long story short, no you do not get lethal whites from crossing a baby with it's mother or father. It's done all the time. Having said that I must also add that this is not something that should be done routinely.  There is a genetic system to crossing what we call F1 and F2 generations.

It should also be noted that just because a pig is white does not make it a lethal white. The lethal is defined by the mutations, not just the color.

This is the same way that new breeds of dogs are created. It takes many years to develop them and is also one of the reasons that many purebred dogs have inherent health issues such as hip dysplasia, heart conditions, cancers, deafness, etc. Mutts NEVER have these issues because their gene pool is so varied that bad traits are not carried and expressed.

Interestingly enough, now that we have designer breeds like the Labradoodle, etc they too are carrying and passing traits because they're crossing them with their own breed (Labradoodle to Labradoodle, etc.)  The very things that are inherent in Labs are coming out in these designer dogs, all of them, not just this particular breed.


I got this next article from Guinea Pig Cages.

Now, some pigs can have the gene without showing it, for instance my sow Suzi has no white and black hairs mixed together, and the black patches on her head are too large and in the wrong place to be dalmatian spots. However, she gave birth to a lethal (she was pregnant when I got her--another good reason to avoid pet stores!). The enormous amount of white hair she had (due to other genes, which don't cause problems) completely obscured any signs of her having the roan gene. So any white pig, or any pig with large amounts of white could be carrying the gene.

Basically, if both parents are roan (I can't see your picture, so I can't see whether the mother is or not) then each baby has a 1 in 4 chance of getting two roan alleles and being a lethal white, and a 3 in 4 chance of being a perfectly healthy roan or non-roan (normally colored). All lethals that I know of have the following problems:
Other problems that I have known lethals to have include:
These are all problems that long-lived lethals have...most of them are worse off and die shortly after birth. Nobody knows exactly why some live and some die, although there may be digestive problems involved (a related disorder in rats causes the affected rats to be missing nerves in their large intestines) and the tooth problems have to be caught and managed quickly. I have a lethal, Einstein, who had his first molar trim at 3 weeks of age and had already been syringe-fed for a week at that point. Einstein is now a year and a half old, and I know of two lethals older than him.

If you wind up with a lethal (or more than one), I hope you'll do the right thing and take care of them as long as they live. It's a commitment of time (syringe feeding, vet trips) and money (Oxbow's Critical Care food, tooth trims) that most people who get into breeding without doing research aren't prepared to make.
The AAGP doesn't recommend amateurs to breed. 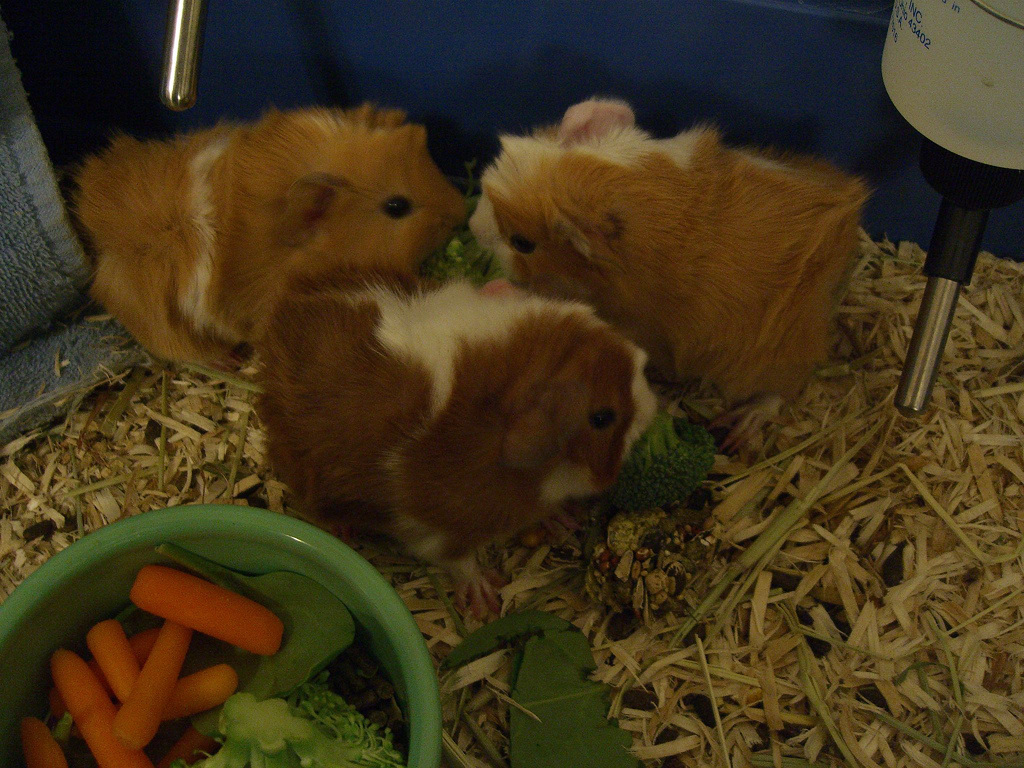