Social Life
Guinea pigs are social animals, so they always want a buddy of the same species with them. They can be any breed, too. No matter how long you play with your cavy, you won't be there all the time, so letting your guinea pig have a companion will do wonders for your piggy. If she/he has no one, she'll/he'll become depressed and will sit in a corner or hidey-hole all day, bored. But if another cavy is there, then they both can talk, squeak, and play!
Aggressiveness
Sometimes when you introduce piggies, everything will go fine. But sometimes they chatter their teeth at each other, and attack. Here is all the safe, dominant behaviors:
Rumblestrutting
Butt sniffing
Butt nudging
Chasing
Butt dragging (they are leaving their scent)
Mounting (any which way: rear mount, head mount, side mount, flying leap mount!)
Nose face-offs (higher in the air wins, one must lower their nose to be subservient to the other)
Teeth chattering: a little (signal of dominance)
Raised hackles (hair on the back of the neck and along the spine)
Here is all the signs of a possible attack (but don't interfere yet!)
Teeth chattering: sustained (signal of anger, aggression, warning)
Nips, light bites, may result in little tufts of fur in their teeth
Wide yawn, but this is no yawn, they are showing their teeth
Snorting (like a strong puff or hiss)
Those behaviors may sound serious, (and should be monitered very closely) but don't interfere, even if you want to.
Here is fighting. (when you SHOULD interfere)
Bite attacks are no longer warning nips, they are lunges with intent to harm.
Combination of raised hackles, loud and angry teeth chattering, rumblestrutting in place with the head staying in one position while facing the other guinea pig doing the same thing. Usually a signal of a biting attack. But they may back down before they engage.
Both pigs rear up on their haunches, face to face. This is a clear, brief signal of their intent to launch full attacks at each other. Separate if possible before the attack.
Full battle. The pigs are locked together in a vicious ball of fur. This is very serious. Separate immediately, but be careful. Throw a towel over them and use a dustpan or something other than your hand to separate them. Unintended bites from their very sharp incisors can cause serious damage.

The best indicator to watch for on when to separate guinea pigs is the posturing of the nipping and bite attacks. If that gets more serious, that's the time to separate them. If blood is drawn, it's definitely time to stop that session. Hopefully, you can separate your guinea pigs before any serious harm is done.

(this game is from the Guinea Pig Zone)
The "Piggies who Bathe Together, Stay Together" Game

Here is another technique used for harder-to-introduce couples or trios, especially when adding a new male to a bonded male pair. You'll only want to try this method if you are already competent at handling guinea pigs and giving baths.

When you are ready to "introduce" the three, take everybody out and put them on the floor. Lay a blanket down and enclose it so they can't escape. Make it big enough so they have room to roam around. They will all notice each other.

Watch their behavior closely. You will notice some things right away. If they hate each other, it's apparent pretty quickly. There will be teeth chattering along with more serious fighting. They may leap at each other and start fighting (it looks like a levitating mass of squiggling piggies). This is bad. Make sure you have an oven mitt or dust pan or a towel you can wrap around your hand to separate them. DO NOT USE YOUR BARE HANDS. Fighting pigs will bite ANYTHING, and very very hard. It will draw blood. Even if they are not actively fighting but are in "fight mode" they can bite. Make sure no small children are around where they could try to stop it and get bitten. See the dating game behavior above to help you determine if they should be immediately separated.

If nobody fights right away, you can relax a bit. They may rumble around and mount each other. This is all normal. You'll notice a lot of bum-sniffing and chasing. This is ok. If they start fighting, refer to the above.

The last option is the best -- instant acceptance. They will run up to each other, sniff, maybe mount a few times, and then settle down to groom the other pigs' ears or something. This is fantastic, but unfortunately doesn't happen all that often right from the start.

If the pigs fight, or fight after a little while, give them all a bath. You can put all three pigs in the bathtub (keep the oven mitt handy) and run about 1 inch of warm water. Soap them all up at the same time with something that smells good. Use a small-animal shampoo that is kitten or bunny-safe (not a baby or human shampoo). The pigs will be freaked out about the bath and will forget that they are mad with each other. Don't get any water in the eyes, nose, or ears. Rinse them off carefully and well making sure that you get all the soap out.

Put them on some towels on the bathroom floor. Dry them off as much as possible with a towel first. Then finish drying them with a hairdryer. Make sure it's on the WARM setting and never get it too close to their skin. Make sure your hand is always on their fur so you can feel the level of heat you are giving them. They will run away. Keep chasing them around a bit until all three pigs are completely dry. When you're done, they will all smell exactly the same.

Try the introductions again, this time on a new blanket that's just out of the dryer or is completely clean. They shouldn't fight. The bathroom scare will hopefully cause them to bond together, and they will group together out of necessity.

If the introductions go well, clean the two boars' cage very thoroughly. Use a vinegar and water solution to clean the Coroplast and throw all other items (pigloo, food dish, etc.) in the dishwasher. Clean any other hidey boxes or toys. You want to remove ALL scents from the cage. When you replace all the items, move them around so that nothing is in the same place as it used to be.

Then put all three boars in the new cage. They will feel that it's an entirely new home and won't be so territorial about defending it against the new boar.
Introductions
1. Find a playtime area and set both pigs in there.
2. Watch carefully.
3. Have someone else either watch or clean your pig's cage so you can do the opposite.
4. If they bond, put them in the cage.
5. If they don't, put a divider between the cages.
(also, you may want to bath them beforehand so any trace of different scent is gone.) 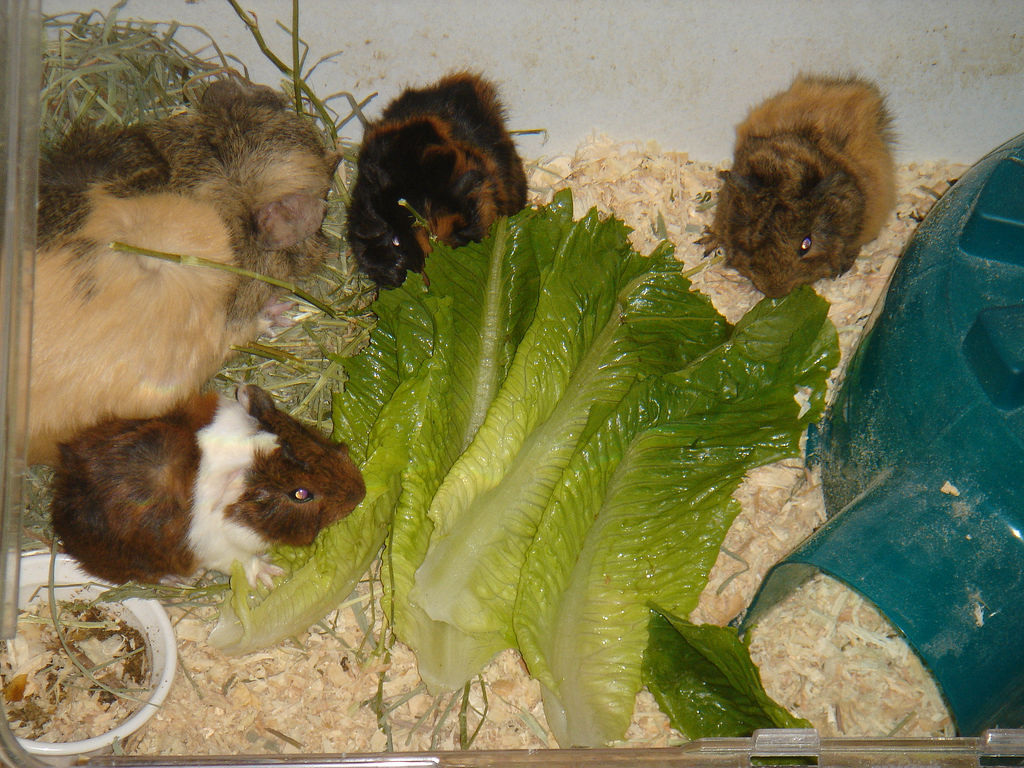